ABSTRACT
This thesis concerns social engagement at the intersection of open design and media technology. The study reflects on the practice of a group of creative entrepreneurs, who seek new methods and contexts for collaboration both online and offline. My case is an international collective called Reboot. They co-produce games, narratives, and workshops that aim at engaging others to become activists for social innovation through experiential learning and applied creativity. I investigate what drives them, what they desire, how they learn, and how they co-create. The core problem is: how does a focus on innovating process shape the way individuals approach work and life? Ethnography forms the central research method. It tracks the exchange and performance values expressed by members of the Reboot collective. I use an experimental enactive research design, which enriches current academic practices in media and design ethnography.

As a theoretical framework, I draw on cultural topology. More specifically, I focus on three characteristics of topology – contiguity, continuity, and poiesis. Headed by these three pillars, my chapters include theories on performativity, affect, and free labour. My data substantiates the workings of these three topological characteristics individually and across chapters. Firstly, in terms of contiguity, I investigate performativity as a theoretical possibility within a topological framework. Reboot offers physical spaces for collaborators to connect. Here, I argue, the group facilitates productive contiguity. I scrutinise their experience of interaction enabled by design in order to make an assessment about performative agency. Secondly, with respect to continuity, I examine affect as a driver of relationships and activity. Reboot facilitates remote collaboration through digital online technology. I show that affective interaction helps to re-establish connection and build relationships to foster further engagement, and that these practices corroborate continuity. Lastly, regarding poiesis, I discuss the notion of free labour against the backdrop of commons-based peer production. I show that collaborators frame their free labour in an emancipatory fashion that reflects high hopes for virtuous behaviour among collaborators and ignores worries of exploitation. I identify this practice as poiesis.

This matters, because these collaborative producers are found to act upon their hopes that they can co-create long term systemic change in society; they experiment with new tools to do so; and they spread their techniques by engaging others. This thesis thus locates itself amongst – and adds insights to – current debates on human passion that drives socio-technical innovation. 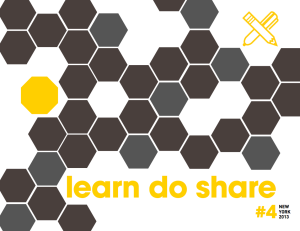 With no resources, just passion and purpose an amazing group of people created another book, and we remain stunned by the impact of open collaboration.

Learn Do Share is a book, a documentation, reflection and learning resource about narrative experiments and social innovation efforts ventured at diy days New York City. We explore participatory systems, collaborative spaces, share culture, and self-propelled creativity. Written and designed by volunteers, the aim is to spread storytelling, empathy and collaboration as a way to “learn, do and share,” and to have a positive effect on creative communities within an open design environment both locally and globally.

Diy days is a social innovation hub and a vehicle for creative sustainability. It is an internationally roving gathering for those who create, free to participants and run by volunteers in the spirit of collaborative culture. Reboot stories designs these gatherings around sharing ideas and resources that help creators to fund, create, distribute and sustain their work. its experimental elements are attempts to explore the future of co-creation embedded in talks, networking and collaborative activities that are meant to spark the imagination of many.