At this year’s Burning Seed Festival in the Australian bush I played my alter ego Dr Divine. I can’t really say any of this was planned, but it’s a perfect example how some things just emerge bit by bit and they come together in a much more coherent way than I could have ever thought up. 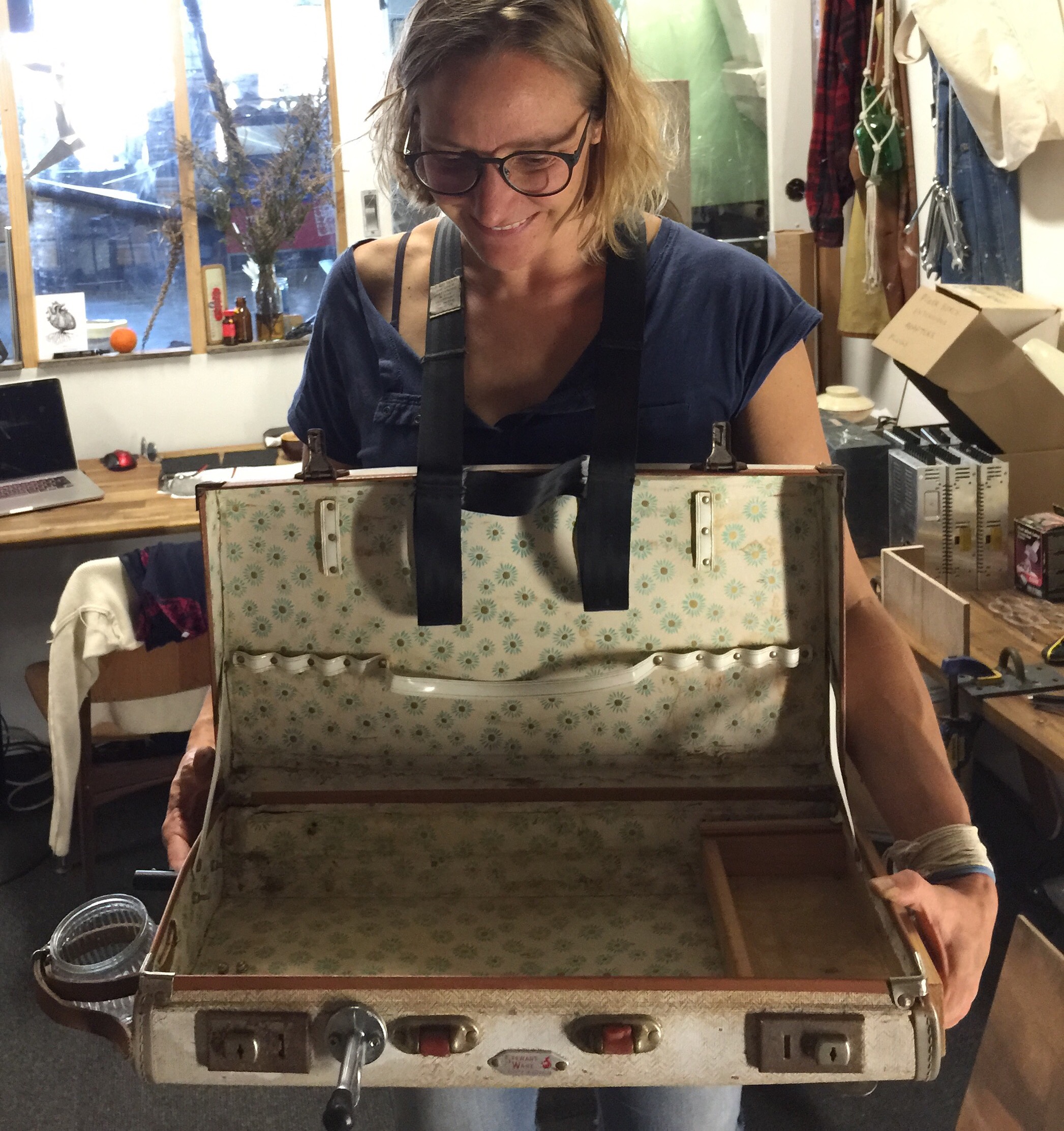 Meet my belly box. We found all materials at the Bower in Marrickville, a junk yard, reverse garbage type of shop. The best place to find odd little things. And we were so lucky! Found the suitcase, a children’s harness that I could easily fit and attach, a small drawer that fitted perfectly into the side, a candle holder, and all kinds of small items and curiosities that gave me first ideas for a love charm and some other games. Then I added velvet curtains behind which I hid some special tools and the magic book.

On the left I put a wooden tray, which turned out to be a sweet bowling lane for my story dice. Next to it fitted a colourful chest that was just big enough to hold a stack of superhero cards that I had made for another occasion. Then I added some random objects that I’d just embue with meaning if someone would point them out. Five dark jars have incense, ear plugs, condoms, which I handed out when someone wanted to shut themselves off to the messages of life (ear plugs), or pay it safe (condoms). In the drawer on the right were oracle cards. It’s an animal totem deck. All of these things I had at home, they just fitted the belly box perfectly. At this point I didn’t really know what exactly all of this would be, so I kind of surprised myself with what happened next (blatant upworthy cliffhanger). 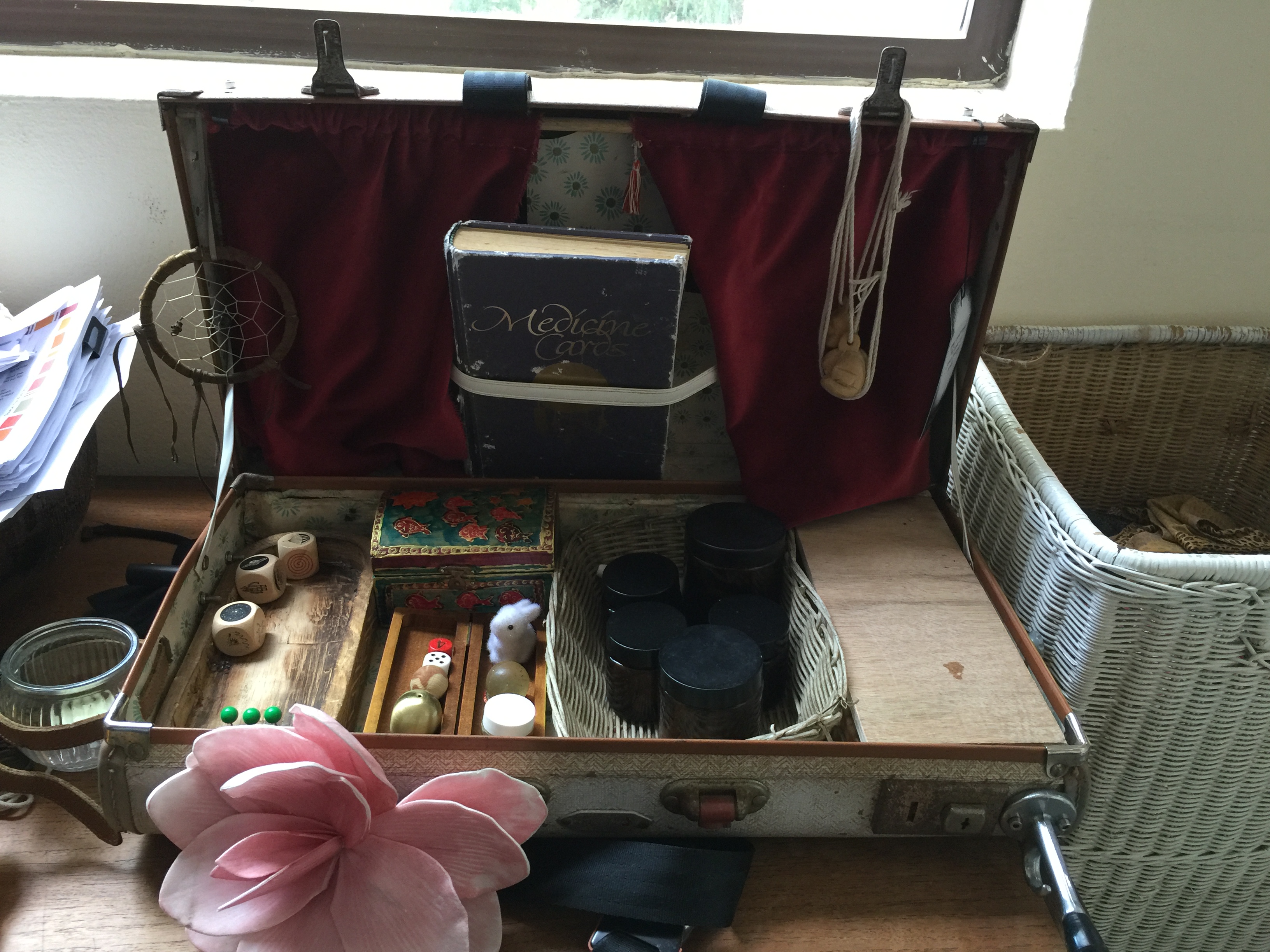 I asked the first girl who came up to me if she had anything in her life she wanted a comment on. She did, so I asked her to think on it while I took both her hands. I locked eyes with her, and asked for her name. Then I introduced myself as Dr Divine. I almost laughed. I had not thought of a name before, but it was perfect. I continued with her saying that I didn’t know anything that she didn’t know herself, but that this suitcase held tools that can help her see. I was astounded by what came out of my mouth.
Sweet. I got into my role.

I offered her to ask me about any object in the suitcase. And I told her about the three main attractions: dice, superhero cards, and  the oracle. She wanted the oracle. I shuffled, and told her to bring her attention to her heart. From the deck she drew blindly. The card was Antilope. The Antilope stands for action. I read out a few lines from the animal magic book and she started crying. Damn. I didn’t expect to make people cry?! What? I dropped out of my role and turned to her, asking if I should stop. She was half joy, half suffering. She smiled and cried some more and asked me to continue. That moment was amazing. The card had just struck something in her, and she said it was spot on, the thing that her family needed to understand to solve a situation. I felt floaty. How nice was that!? 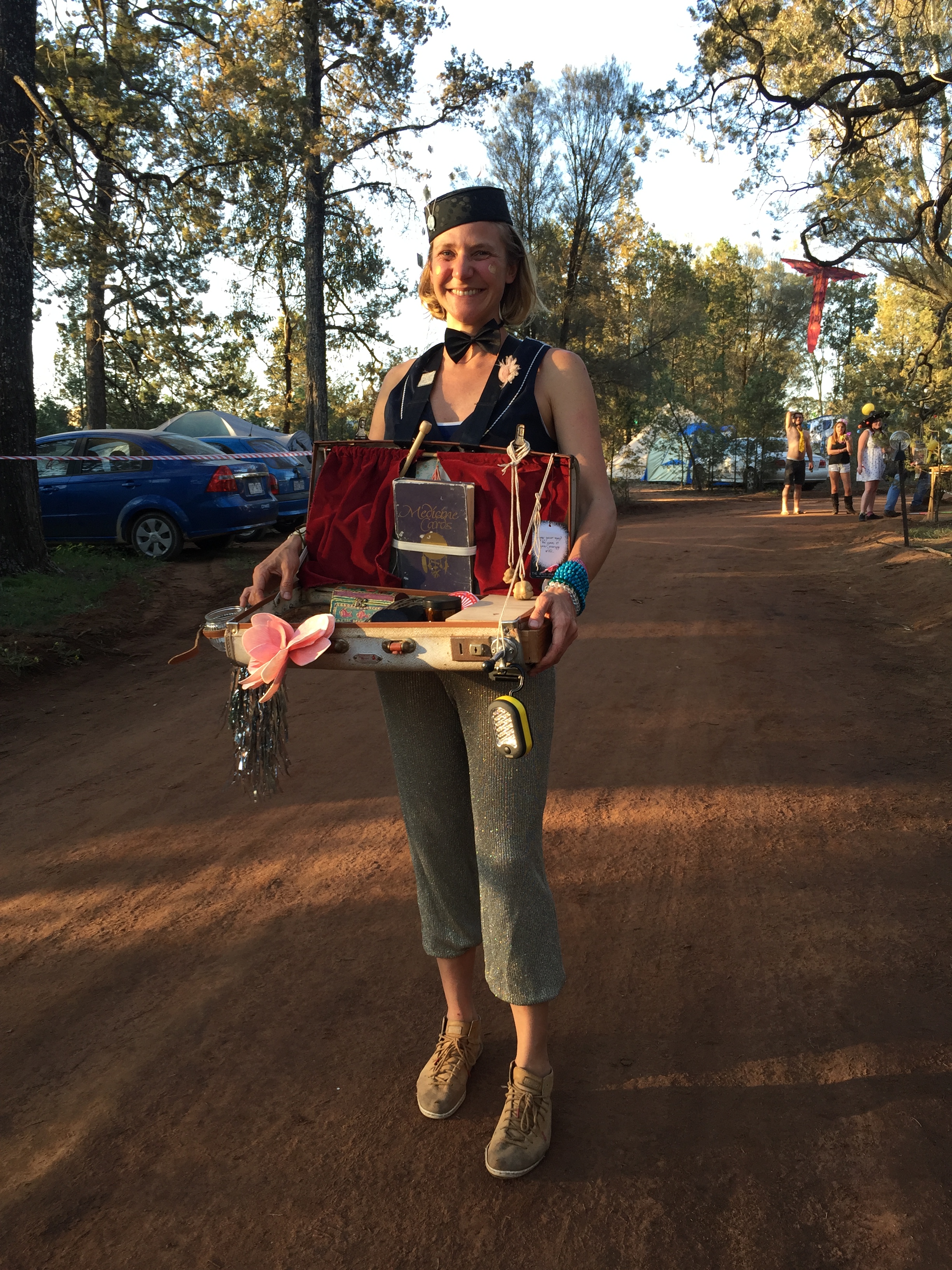 Meanwhile a small crowd had gathered around me and I started feeling self-conscious, but, … wow, did I enjoy this. There was something profound taking hold of us. When I took my guests’ hands and we locked eyes we made a contract. It was significant. For the time of our interaction, we were in a magic circle, a safe zone, in which it was just us, and the belief that something wonderful would happen. I could see it in their eyes.

I had about 15 interactions that night and I remember all of their faces. One German guy chose the storytelling dice. He rolled them and got three images he couldn’t really connect. I got a bit nervous, because I hadn’t really thought this through, but then collective consciousness switched on and gave me me the right questions that prompted all these profound insights in him. The story became the thing that he had asked about but also reflected his attitude towards life in general. The details of the symbols made him connect dots he hadn’t connected before. He probably stayed with me the longest. He just didn’t want to leave again. We ended up sharing details about our PhDs and how both tapped into intuition as a neglected source of life making.

While I was playing with my guests I noticed that most women chose the oracle while men chose dice or superhero cards. The superhero skills were pretty popular with anyone and I gave one to each guest at farewell even if they had chosen another game to play. With each explanation of the suitcase I got clearer that the dice were a game of chance, the superhero cards were banking on your skills, and the oracle was about faith. Chance, skills and faith. Ha. Three major way in which we as humans try to get a hold of our future. What a colossal insight. And none of this was planned. It really just emerged little by little by just starting with a vague idea and chipping away on it whenever it felt right. That’s a good way to work and bring meaning and joy into our lives. I like it.