In October we were in 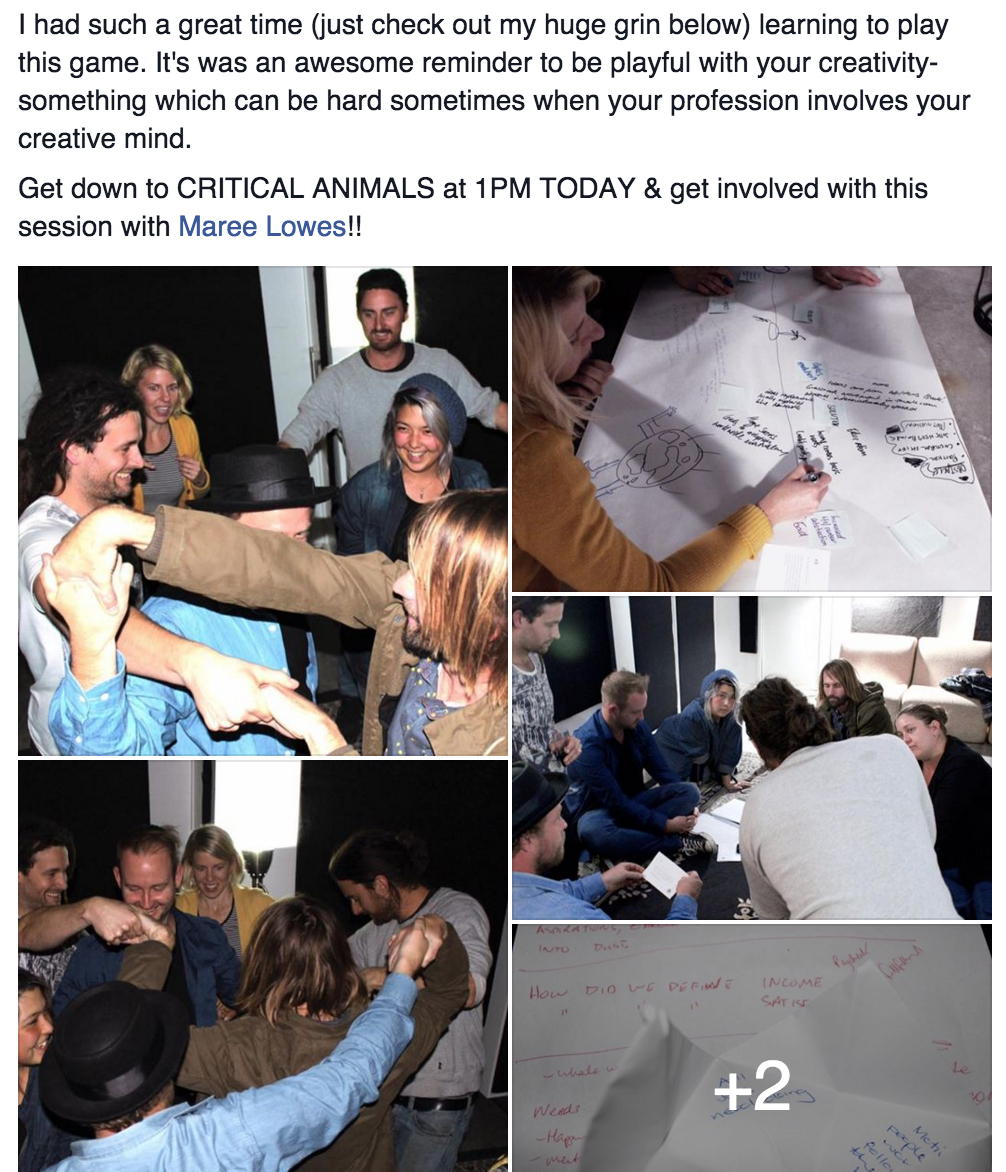 vited to Newcastle to run a two-part game called Be.Poietic.Punks. Our plan was to explore intuitive and associative ways of collaboration. Claire Marshall and I weren’t sure if we could make it to Newcastle that day, so we asked the incredible Maree Lowes if she’d be interested running the show on the day.

Maree had never heard anything about the game and, man, she’s the coolest; just dived in and excelled! To prepare, she ran a game test with friends and revelled in collective joy.

When the actual game day came, she facilitated the game smoothly. I did make it to Newcastle just in time to play and be a participant. It was glorious. The group sparked brightly. Thinking, building, crafting, drawing. The design question was: 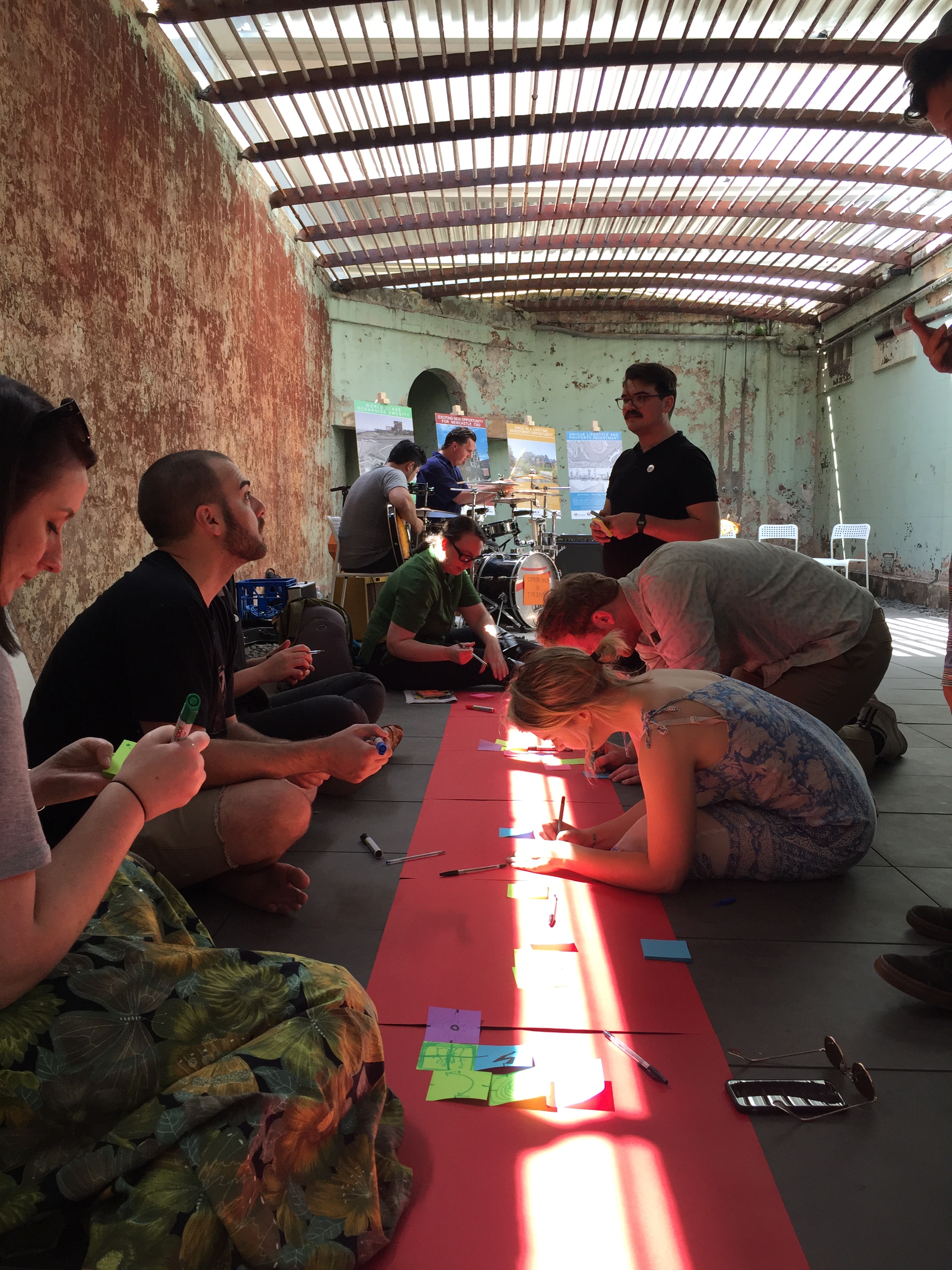 “How can we create a city without cars?”

The group was divided into 3 groups: the Future, the storytellers and the designers. Each of the groups worked by themselves but would feed their ideas into the other groups at certain stages throughout the game. So the Future determined that due to rising sea levels the city’s streets will be permanently under water. The designers took on the challenge and came up with a system consisting of floating community hubs, hydroponics, and peddle powered hover crafts. The storytellers developed a wonderful narrative arc that played out across time: There was a scientist in the past – Brett Better -, who has developed the beginnings of a (hovercraft) technology that would run on solar power. He never got it to work, though and was, unfortunately, assassinated by the government, because the technology threatened the wealth of corporations. When the flood hit, the people didn’t know how to organise themselves, because they had no transport and no communication technology. Then – the long lost daughter of our hero Brett Better – Lore Better – appears. She had never really fitted in with the community before, being more interested in drumming and tinkering. But she was pissed off that there was no more transport to get her drums to places, so she teamed up and shared her wisdom. 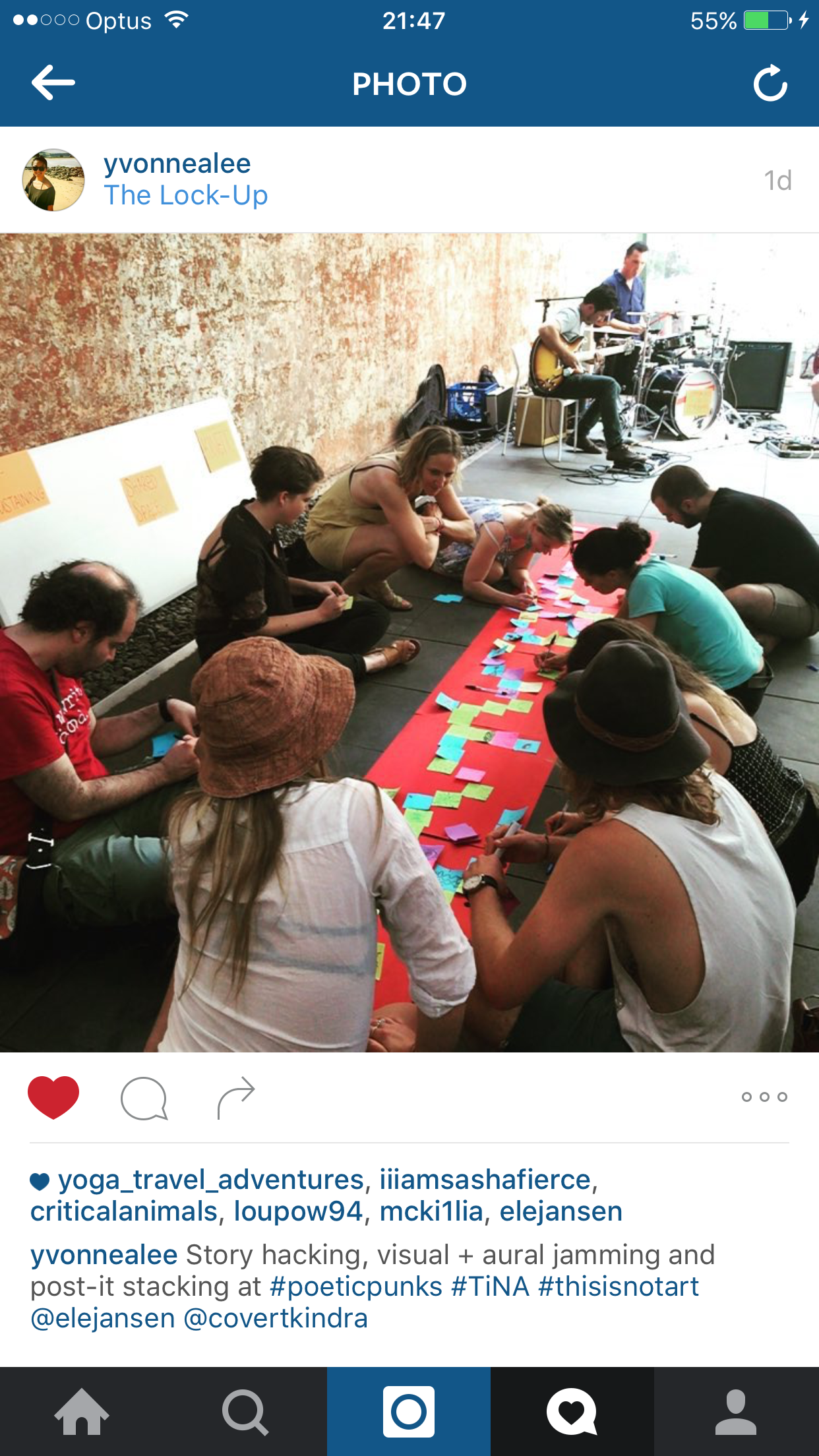 Turned out that she had completed her father’s invention and they instantly started building it. Also, she had huge influence on how the community started communicating, because she knew the art of jamming. As a musician she knew how to feel others, pick up on cues and respond in a harmonious way. So, while everything seemed to be dire, the people started having a fabulous time, bringing themselves into play.

For day two, we had planned a lose walk-in experience, where we displayed the story and some keywords from day one and gave people post-it notes to draw their associations and place them randomly on a “red carpet”. The whole would assemble as a non-linear visual narrative. A bit like an exquisite corpse meets affinity mapping.

My favourite part was the music. We had asked three musicians to jam to whatever input they’d get from the participants. How’s that for serendipity!? Having an actual jam on day 2 was planned long before drummer Lore Better appeared in the story … !! … 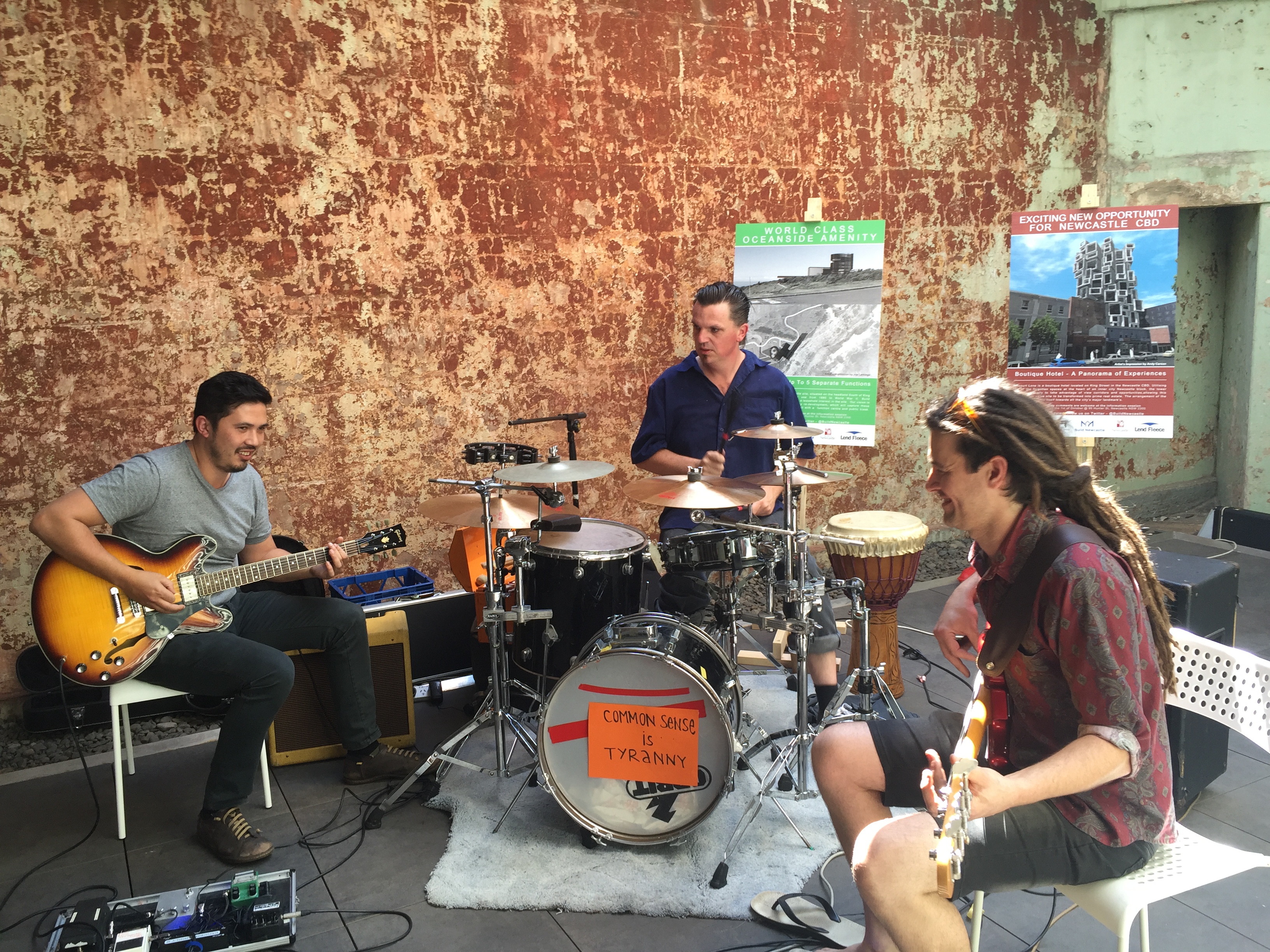 Back in the room, every now and then someone would get up and show the band a drawing. There was hardly any speaking for about 1.5h. All that happened was drawing, placing, showing, jamming, reordering, contemplating. The musicians influenced the mood in the room – and the nature of the drawings – with their pace and rhythm. And the creative expression of the drawings they played altered their rhythm and pace. They had never jammed together and their play was spirited! We danced and I felt many people bonded, stayed longer, and just enjoyed the serene and playful atmosphere everyone created.

So what…
Our non-linear story didn’t really go anywhere apart from us enjoying the various interpretations of it. And our solution will not be developed or implemented by any of us. But that wasn’t the point. The point was that by creating something together we teach each other what we really care about. And that we are the ones that can and should be the change we want to see. And we tested what happens when we create intuitively and associatively. I believe there is a lot of important knowledge in our bodies that we forget to access, because we put so much emphasis on our minds. So we’re playing with empathetic ways of learning and working together. 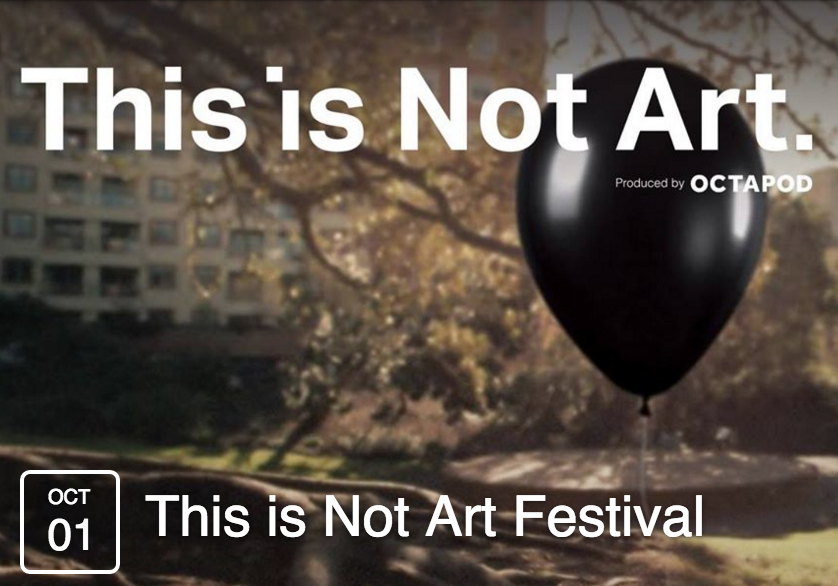 Lastly, a word on the festival where all this took place: Critical Animals is a creative research symposium held annually as a part of This Is Not Art festival in Newcastle, Australia. It’s a forum for students, researchers, writers, artists, thinkers and curious individuals who are critically engaged with creative and experimental art practices. It’s an opportunity to present papers and ongoing research, as well as to challenge creative practices and work collaboratively with others in the field.