Over the course of a few years, I’ll tie different strands that I research together. I use LORE as a term for this package of research; LORE in the sense of “folklore” but also as “body of traditions” or (in)visible cultural norms we abide by. First, because everything I do places itself in storytelling. Also, because I live and die for a good faerytale. And lastly, because I was invited by an indigenous elder to learn with her. In Wirradjirri, the indigenous Australian Dreaming is referred to as LAW/LORE, which opened up a whole new way of thinking about culture and ethics as a way to “law”. The different strands that I collect under LORE are emerging as I evolve. The first theme that came to me was Androgyny, or generally everything that’s in-between. 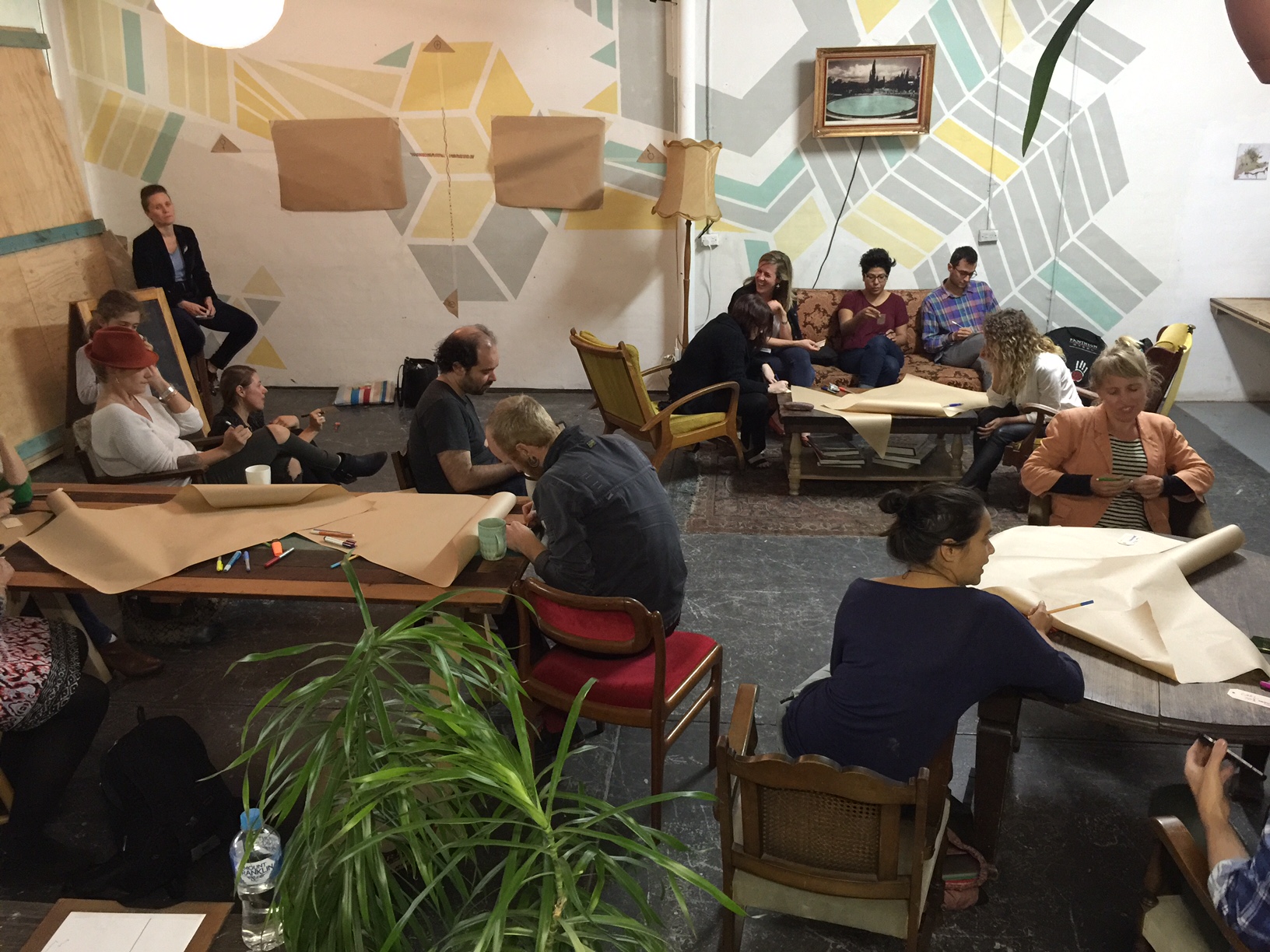 To get my ethnography going I started a facebook group to start a conversation about the “in between” across many domains: sex (on being both masc/fem as male/female), politics (on binaries and unity), creativity (on being ambidextrous), mind (on reasoning and sensing), culture (on science and art), philosophy (on spirituality and logic). It’s about integration and remix and what it means when it gets jumbled in a body; how it (re)presents itself in the world; and about our agency. Something important is shifting globally and here’s a forum to move beyond binaries. 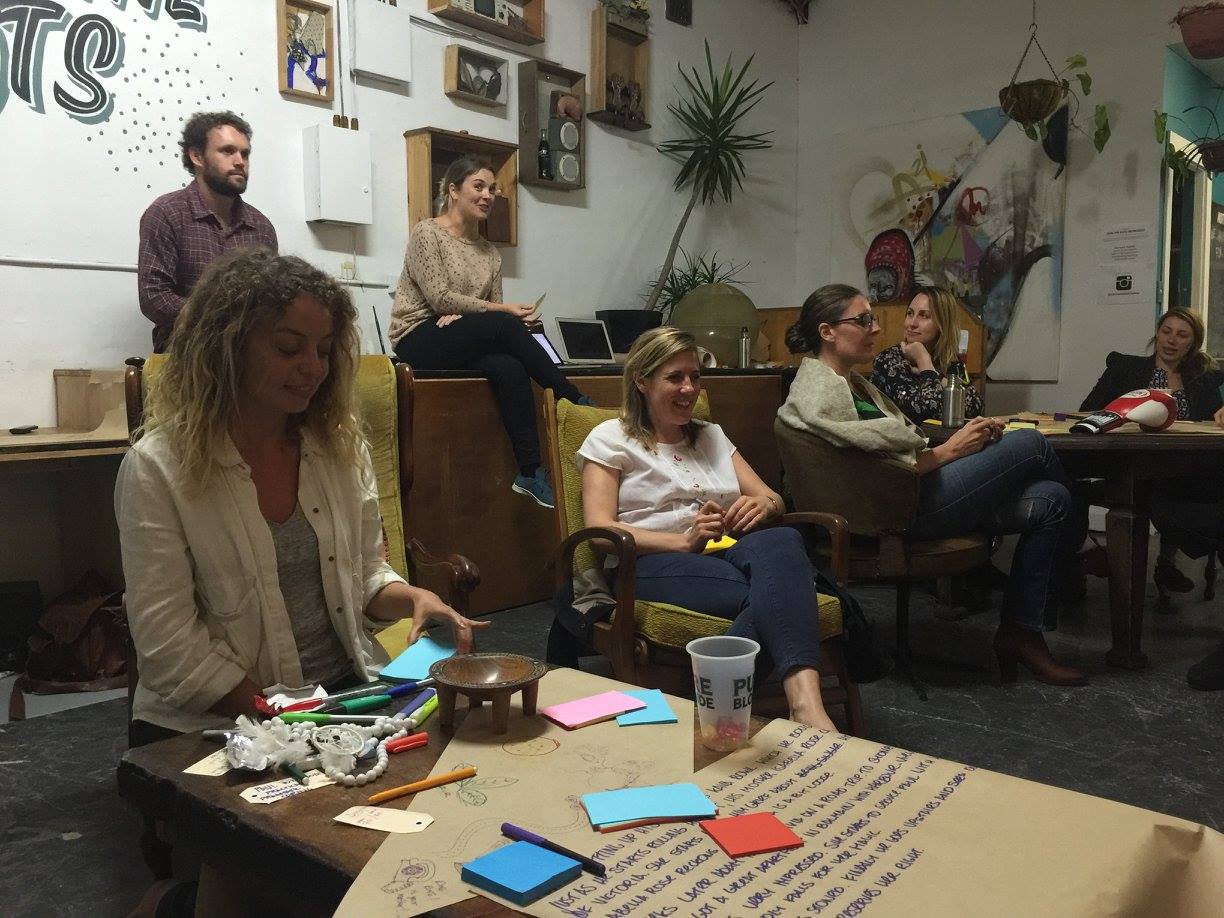 Soon after I had about 300 group members, I invited those based in Sydney to a local workshop, a playground to explore and make-do. We were about 20, meeting for 3h at Join the Dots, a workshop space in Marrickville. We had queers, cis, mums, dads, singles, Europeans, Australians, freelancers, artists, consultants, yoga teachers, designers, employees, entrepreneurs, writers, musicians, academics, artists, oh dear so many, all between the age of 5 to 50.

The main questions we asked when designing this playground were:
– How can we soften current labels around gender, queerness or heteronormativity?
– How can we soften ubiquitous divisive/competitive language (i.e in Business and Science) to a more androgynous/integrative one?
– How can we play in between binaries and make people comfortable with that fuzziness? 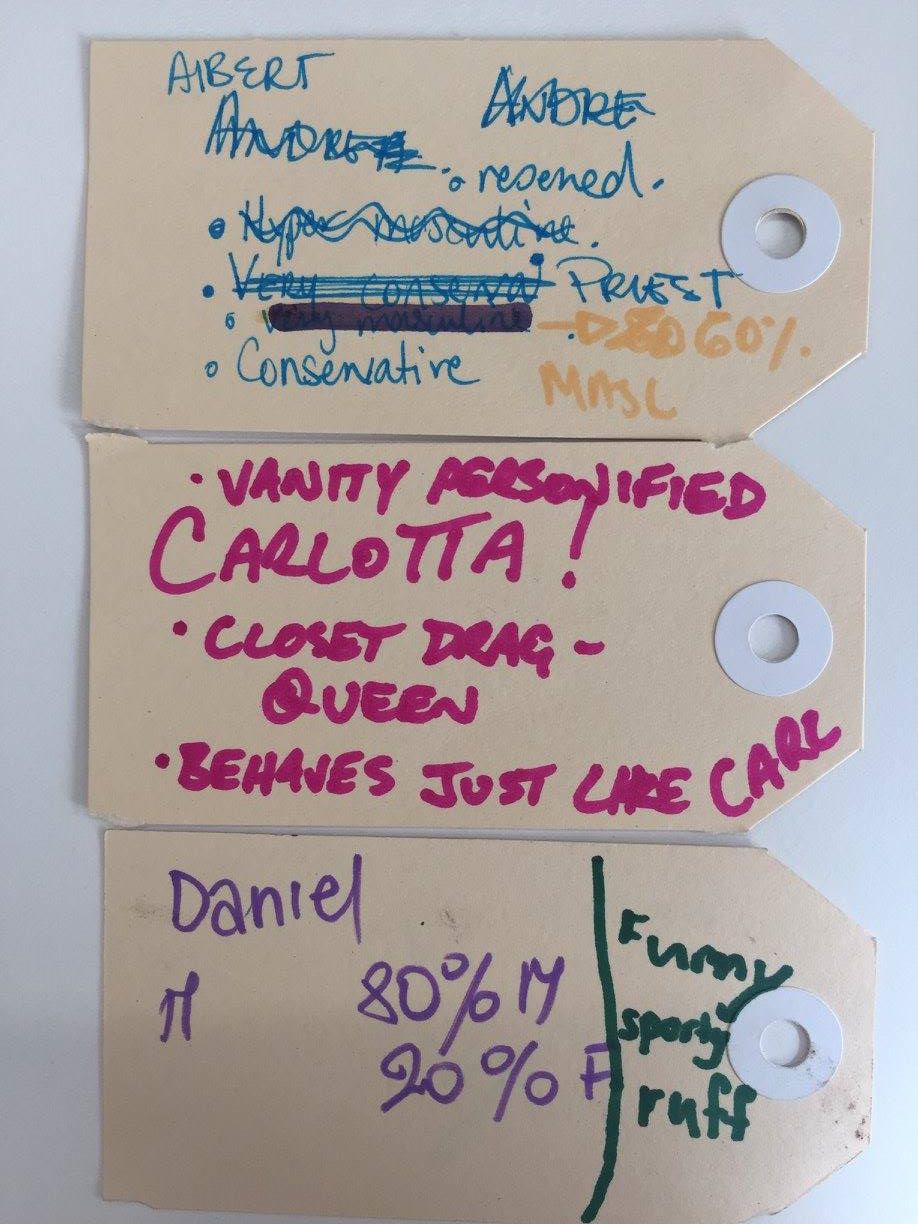 We started with a little identity change. We gave each participant a small tag. On the one side they first estimated their percentage of feminine and masculine traits. For example,  today I feel 70% feminine and 30% masculine in a female body. Then, we turned the tag around and wrote on the other side. This time, we would choose the opposite or a variation that is very alien to me. For example, I would now have a male body and feel 90% and 10% feminine. The idea was to tap into empathy. Once we had our characters, we all pledged to stay in character throughout the workshop. When we did this, Baran played the hang for us. The atmosphere was so joyful, chilled and energised. Loved it.

Before the workshop we had asked everyone to bring three objects, ne that is masculine, one feminine and one neutral. We laid out a large butcher paper and everyone traced their object and took it away again. 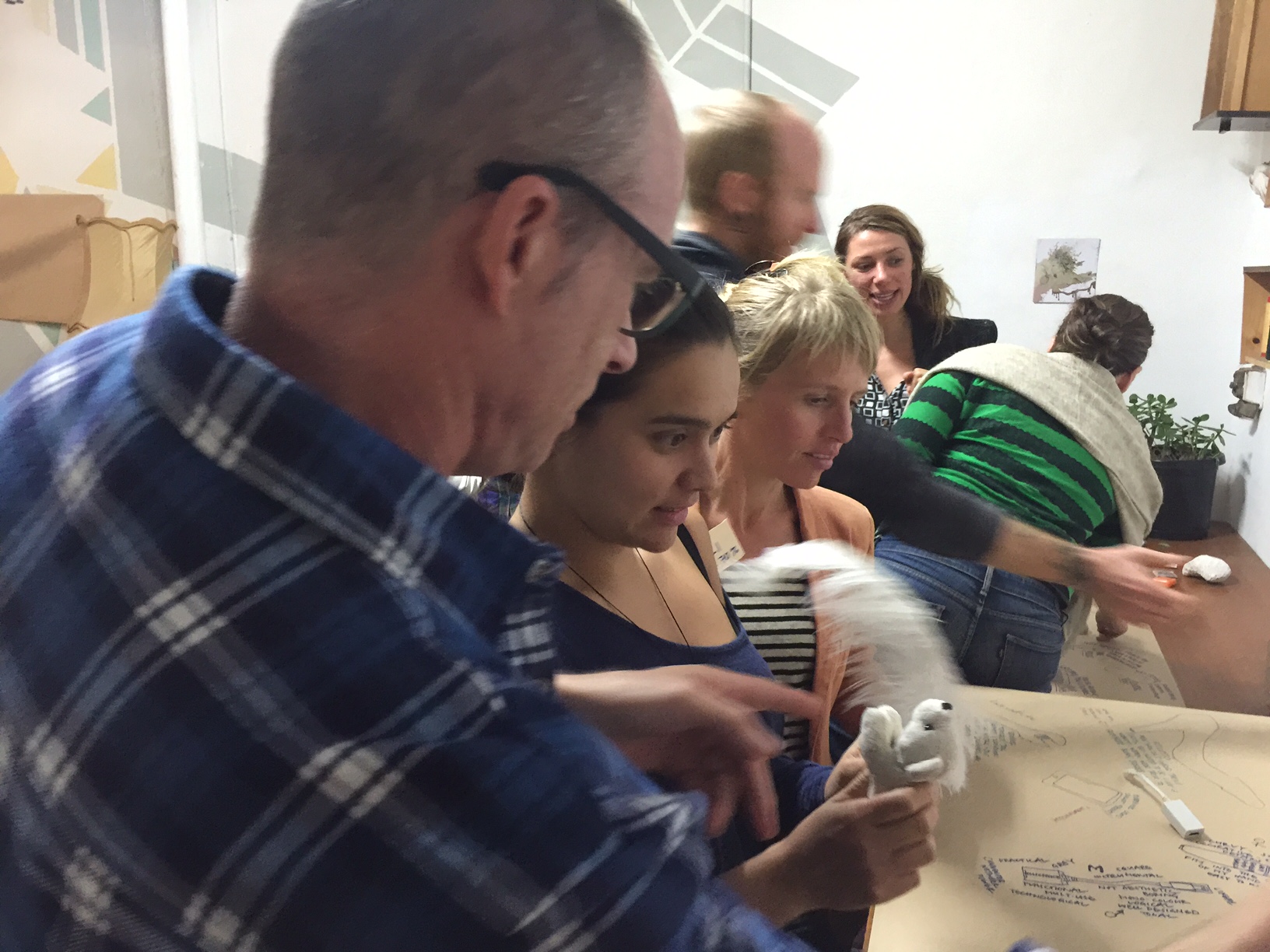 Just looking at the outlines, the group walked around and wrote adjectives next to the traces. This way, we collected impressions about shapes and outlines that hint on masculine and feminine, but we also gathered counterintuitive statements. Overall, we figured that objects were divided into fem, neutral or masc according to their function and/or shape. Very interesting was the 5-year-old, who couldn’t identify specific female objects, everything was male or neutral. Overall, we saw that everyone started from a different idea of what Androgyny is. 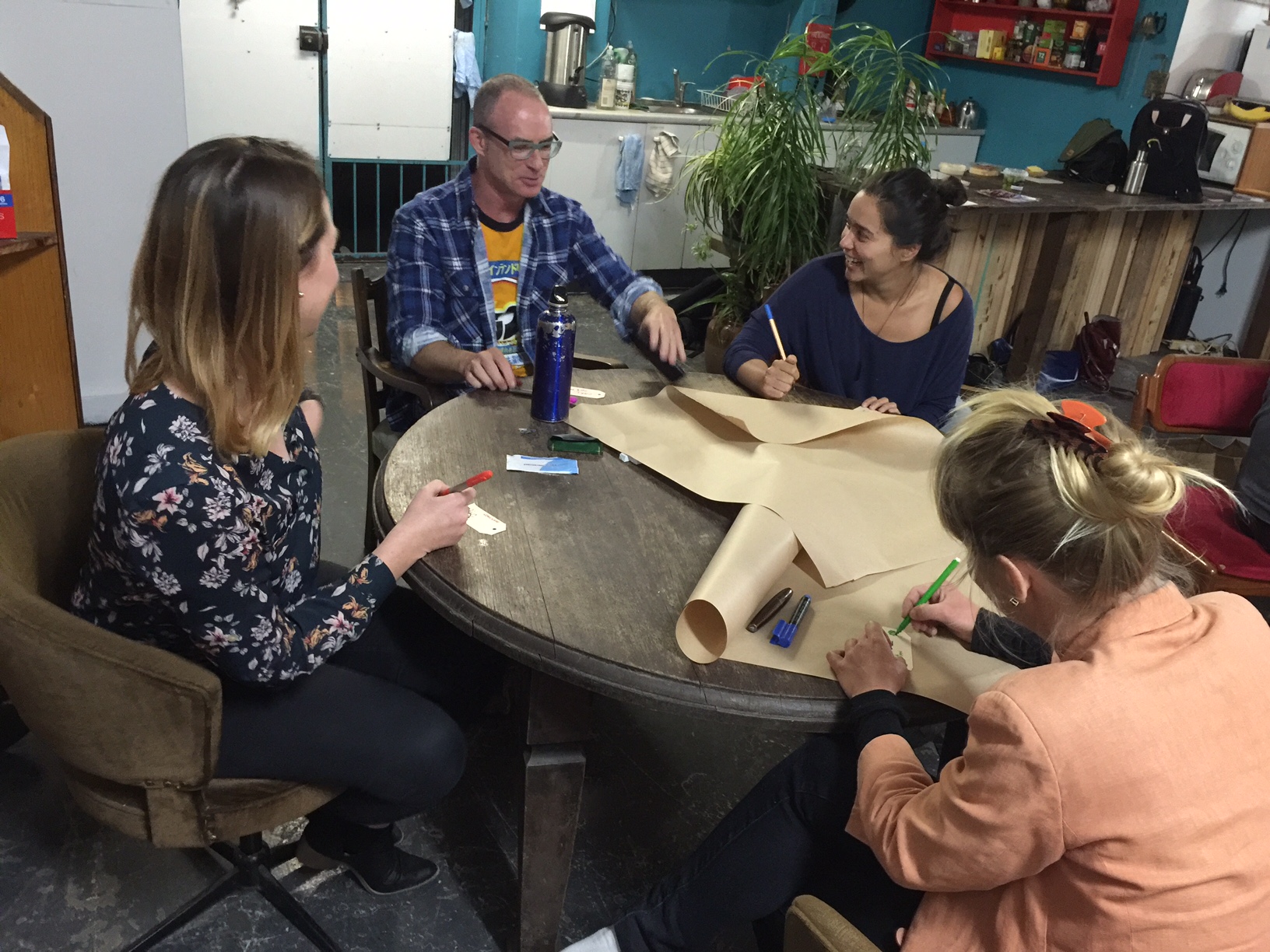 To go into the next exercise we asked everyone to choose an object and form groups around a certain object. The task was to create a story that incorporates the object and the gender swapped characters we were playing. For the next hour, groups drew story boards, build small objects and wrote various versions of character development. All this work was done on butchers paper. 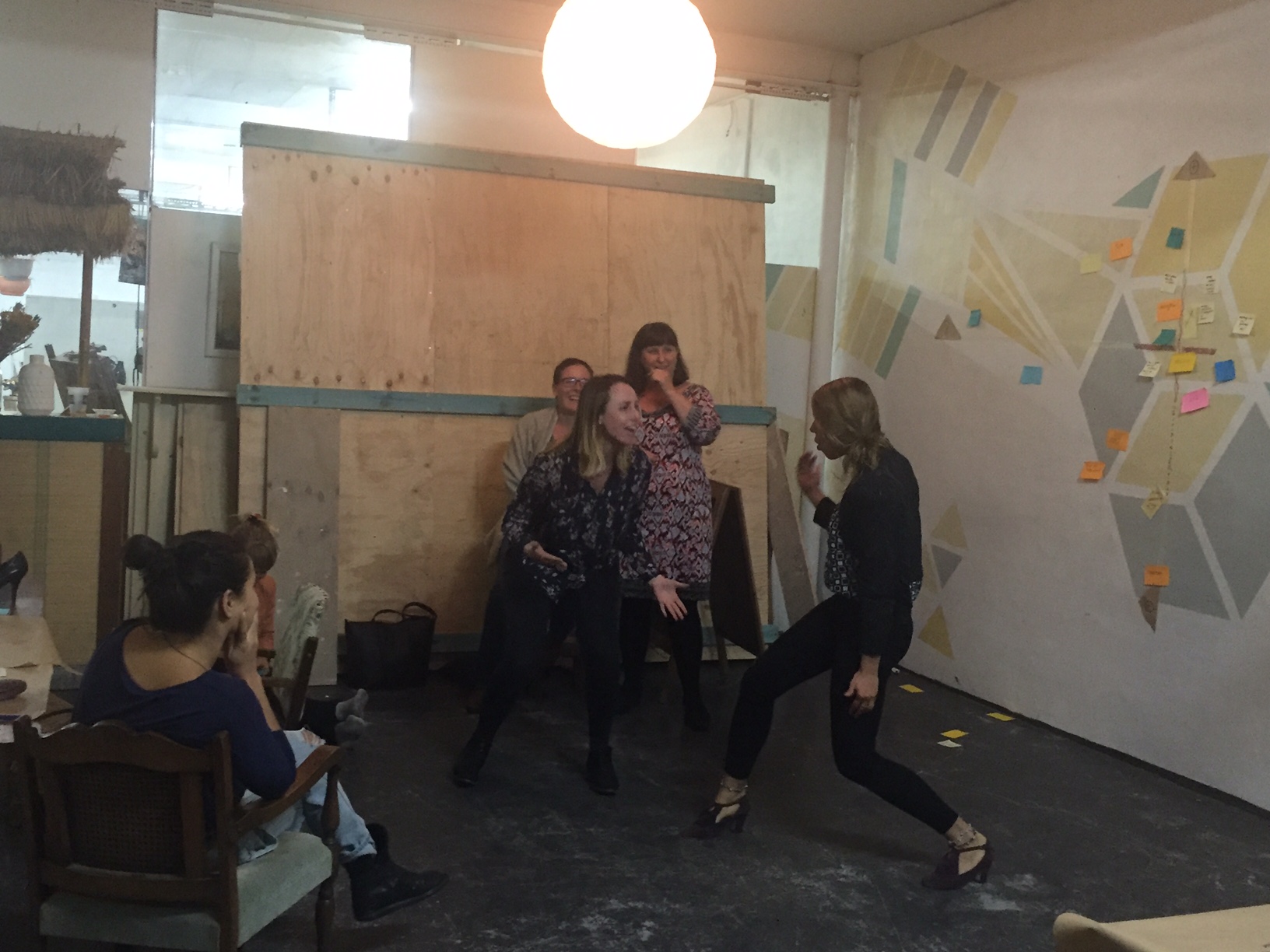 To share their ideas, each group improvised a 5-minute performance with everyone on stage performing their character in drag. Giving everyone a counterintuitive role, our idea was to help people get into other people’s shoes. But what happened instead was that all our stories poised  at the edge of stereotyping. It was remarkable to see how we all exposed ourselves freely to how little we actually knew about what it really felt like for others. 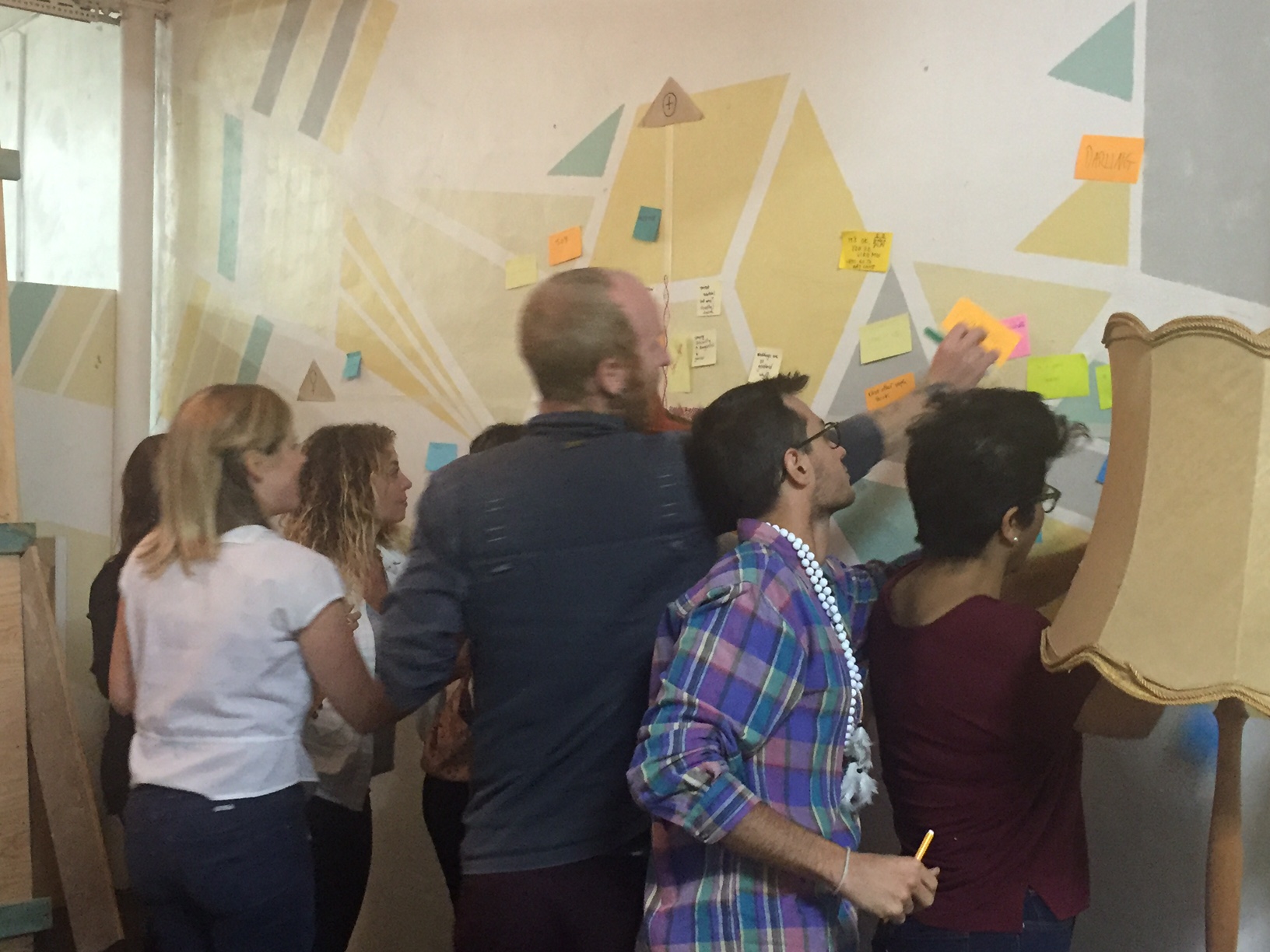 While listening to the stories, the audience would make notes on “Triggers and Thresholds”. Whenever they were triggered emotionally by something pleasing they would write down one word. And whenever they felt a reaction to a threshold, or a liminal space, that is threatening to them, they wrote down a keyword that popped up in that moment. All these keyword were noted on post-its. 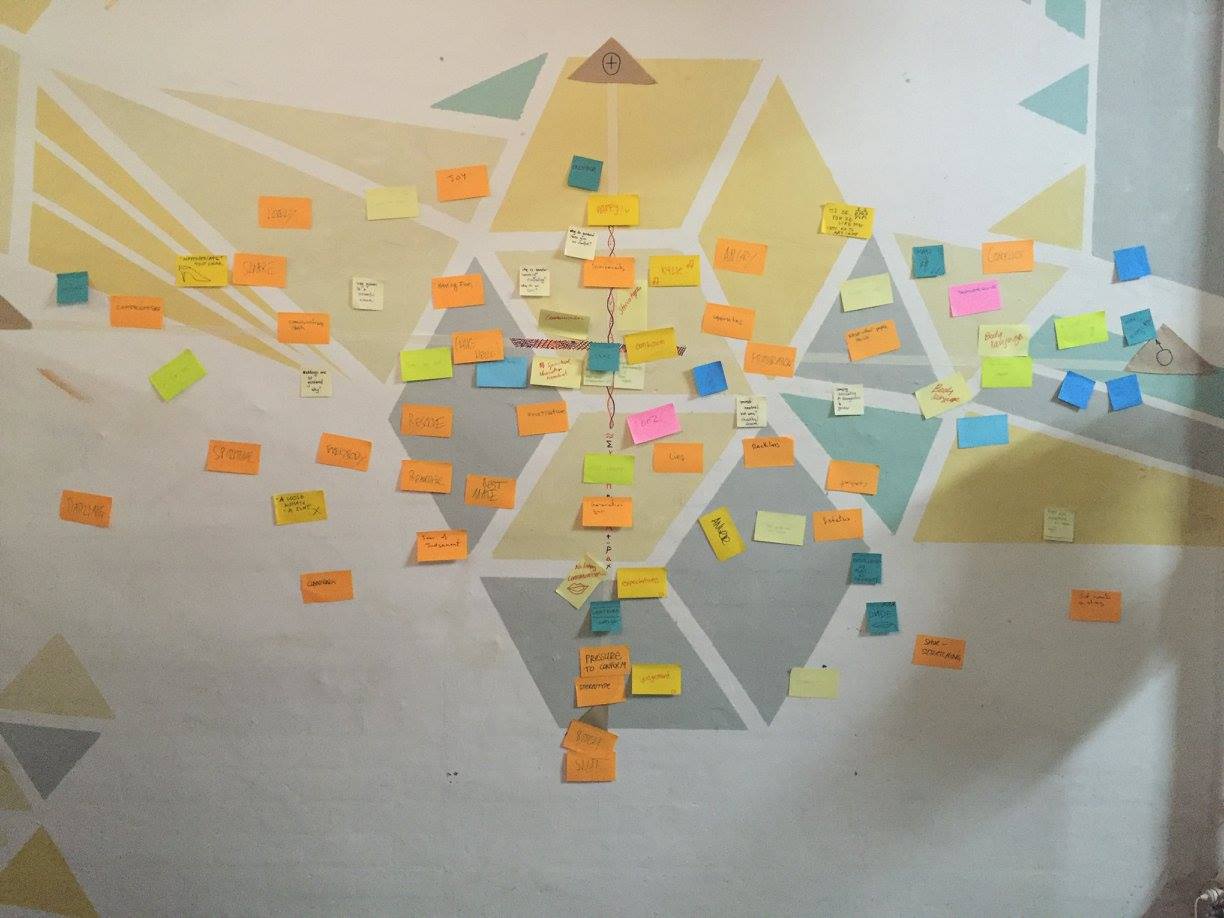 On the wall we had created a matrix, on which we collected these statements to get an overview about feminine  and masculine gender ideas in the room. After each performance the whole group would run at the wall and place their triggers and thresholds along a horizontal line that ran from feminine to masculine, and a vertical line that ran from trigger to threshold. 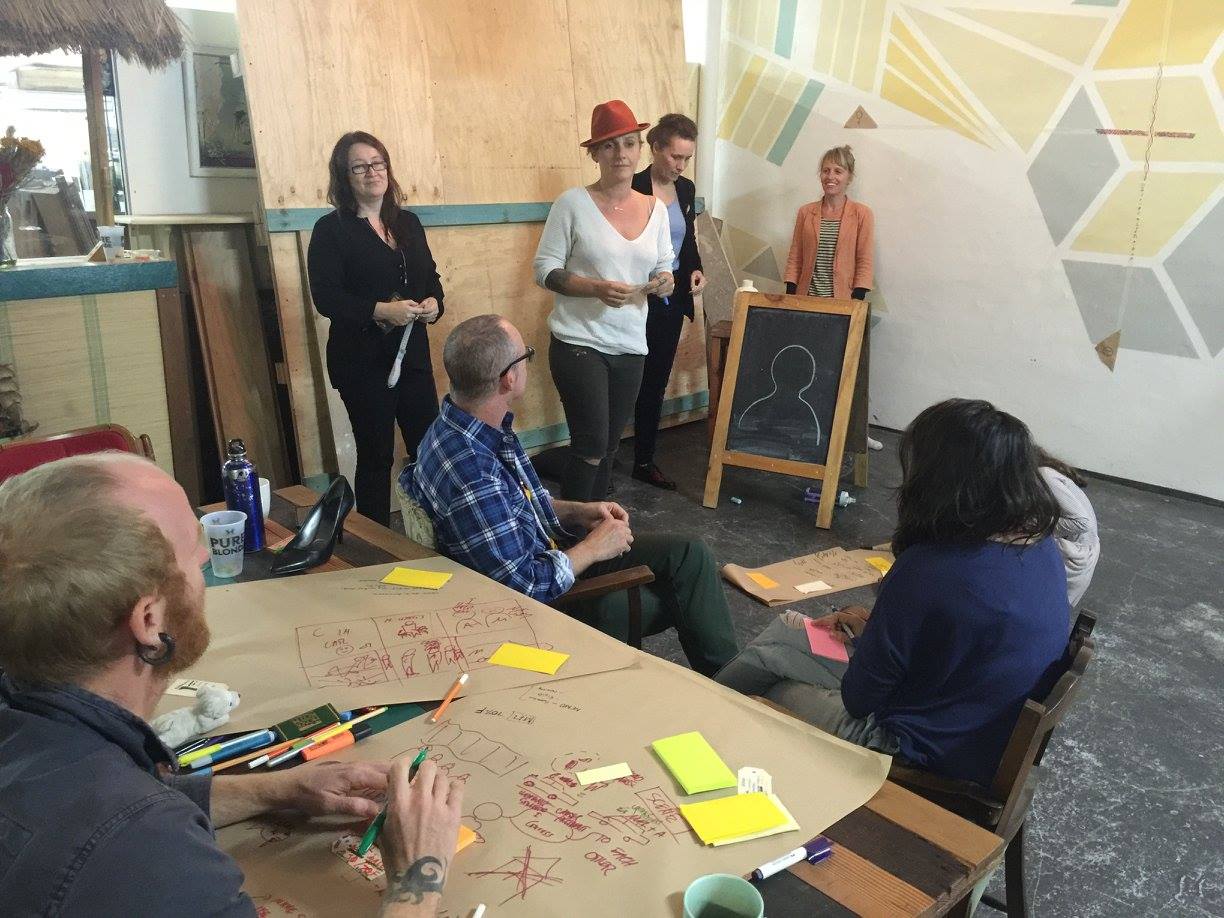 With such a short timeframe there was no more time to drill deeper into areas, such as the “in between”, transgender, orgasms, sexuality, politics, business, language, emancipation of gender, evolution, etc. We left knowing that there was great interest in a series of playgrounds around the topic.
More photos and details are here.

ABSTRACT
This thesis concerns social engagement at the intersection of open design and media technology. The study reflects on the practice of a group of creative entrepreneurs, who seek new methods and contexts for collaboration both online and offline. My case is an international collective called Reboot. They co-produce games, narratives, and workshops that aim at engaging others to become activists for social innovation through experiential learning and applied creativity. I investigate what drives them, what they desire, how they learn, and how they co-create. The core problem is: how does a focus on innovating process shape the way individuals approach work and life? Ethnography forms the central research method. It tracks the exchange and performance values expressed by members of the Reboot collective. I use an experimental enactive research design, which enriches current academic practices in media and design ethnography.

As a theoretical framework, I draw on cultural topology. More specifically, I focus on three characteristics of topology – contiguity, continuity, and poiesis. Headed by these three pillars, my chapters include theories on performativity, affect, and free labour. My data substantiates the workings of these three topological characteristics individually and across chapters. Firstly, in terms of contiguity, I investigate performativity as a theoretical possibility within a topological framework. Reboot offers physical spaces for collaborators to connect. Here, I argue, the group facilitates productive contiguity. I scrutinise their experience of interaction enabled by design in order to make an assessment about performative agency. Secondly, with respect to continuity, I examine affect as a driver of relationships and activity. Reboot facilitates remote collaboration through digital online technology. I show that affective interaction helps to re-establish connection and build relationships to foster further engagement, and that these practices corroborate continuity. Lastly, regarding poiesis, I discuss the notion of free labour against the backdrop of commons-based peer production. I show that collaborators frame their free labour in an emancipatory fashion that reflects high hopes for virtuous behaviour among collaborators and ignores worries of exploitation. I identify this practice as poiesis.

This matters, because these collaborative producers are found to act upon their hopes that they can co-create long term systemic change in society; they experiment with new tools to do so; and they spread their techniques by engaging others. This thesis thus locates itself amongst – and adds insights to – current debates on human passion that drives socio-technical innovation. 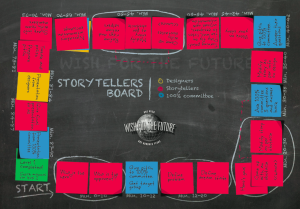